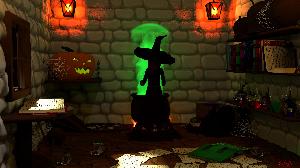 I like to create things in 3d, and one of my first full picture was this one. I wanted to create the small house of a witch. I had a lot of fun to do that because of the many elements I needed to create. Of course that's not the work of a professionnal, but I pretty happy of the result.

To create this small picture, I used blender. This software is awesome. I don't need to, and I won't, buy an expensive software to do the same thing. The only negative point for me was the render time. I didn't need a realistic render, but cycles is mostly made for that. Now there isn't any problem with eevee!

I think the textures were the most difficult to create. I could have taken some over the internet, but it give a strange feeling if the textures are too well made for the picture. What I mean if when a newbie (like me) tries to use realistic textures, it doesn't feels great at the end, because the result is obviously not realistic.

So I decided to use my graphical tablet to do that. At first I began texturing in blender, but it's not made for drawing, and that was not easy to create textures. So I was in search of a software to do that better. My first attempt was to use Gimp. I like this software to do a lot of things, but drawing is not is best point in my opinion. And the I found Krita. That was the software I wanted. It's a bit like blender, a lot of updates came and are coming, so the software is better each day. And it's really made for drawers.

Obviously I don't speak about the big software that cost a lot. It may be necessary for a professional painter to use those, but for me I think I can just find free (and open source) software to enjoy what I'm doing, without losting all my money.

Here is the picture: